It’s fair to say that 2020 hasn’t been the year we had hoped for. With various lockdowns, school closures, cancelled holidays, postponed weddings and the loss of loved ones, it’s been an incredibly tough year for many.

But before we commit 2020 to the history books, we thought we’d look back on some of the moments from the year that embodied the positivity, compassion and camaraderie that emerged during some of the most difficult times.

Whilst March may feel like a distant memory, the first lockdown brought us all sorts of stories of communities coming together to support one another through the crisis.

But one town faced a ‘herd’ of unexpected visitors as goats took to the deserted streets of Llandudno. Normally grazing on the unpopulated Great Orme, the mischievous bunch were spotted climbing garden walls, eating flowers and running through the town centre[i].

“The mischief and antics of them has definitely helped to lift spirits – not just in the town but globally when the images and video get shared on social media by myself and many other people” – Andrew Scott, Llandundo resident[ii].

2. Clap for our Carers

For nine extraordinary weeks, millions of people around the UK stood at their doorsteps to cheer, monuments were bathed in blue and the odd firework or two was lit in honour of the incredible efforts of the NHS staff working around the clock in order to keep us safe[iii].

Few could have predicted the popularity of the initiative, with towns and cities erupting into applause as 8pm on Thursday became a collective ritual.

The #ClapforCarers movement was instigated a final time on 5th July to commemorate the 72nd birthday of the NHS, with people taking to their front doors once more to thank the dedication and sacrifice of so many. 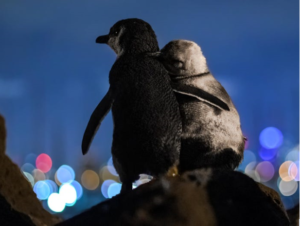 ‘During times like this, the truly lucky ones are those that can be with the person/people they love most’.

Photographer Tobias Baumgaertner, who snapped the precious pair stated, ‘a volunteer approached me and told me that the white one was an elderly lady who had lost her partner… since then they meet regularly comforting each other and standing together for hours watching the dancing lights of the nearby city’. In November, the photo was named a finalist in the Ocean Photography Awards.

It was a welcome reminder for us all to enjoy the additional time gifted to us with our loved ones.

4. Street Art popped up all over the country, reminding us that even the darkest days must come to an end. 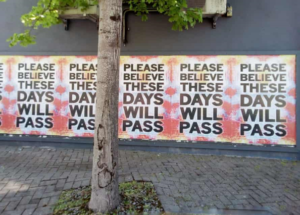 From Darlington to Dagenham, houses, roads and shops were reinvigorated with splashes of colour.

From Bruce Forsyth reminding us of the 2 metre rule to outpourings of gratitude for the keyworkers keeping the country moving, the creative talents of thousands of artists across the UK brought us together in shared moments of laughter and appreciation.

5. Celebrities helped out with home-schooling

As schools closed their doors and the classroom transformed into a virtual space, teachers worked hard to ensure every child had the tools to continue their education from home.

Numerous celebrities pitched in to help out with this monumental task; Joe Wicks kept us moving with his PE lessons each morning at 9am, former Countdown star Carol Vorderman offered free maths tuition and Steve Backshall, naturalist, writer and host of ‘Deadly 60’ hosted live Q&As on wildlife, biology, geography and exploration[v].

At the start of 2020, you may have been forgiven for not knowing the name Marcus Rashford, unless you’re a devoted Manchester United fan. But fast-forward 12 months and Rashford is a prolific social justice campaigner and national hero, picking up an MBE and a special award at the BBC Sports Personality of the Year after his work for the provision of free school meals during the summer holidays prompted a significant U-turn in government policy[vi].

Rashford, supported by his mum Mel, coordinated a campaign with charity ‘Fareshare’, raising £20m to supply three million meals to vulnerable people. As we started a new academic year in September, Rashford’s campaigning continued, recruiting the might of major UK food brands and supermarkets to expand the reach of free meals to pregnant women and parents with children under the age of four.

As the infection rate grew and NHS staff continued to work around the clock with little respite, The Pod in Clarence Place kick-started their ‘Buy an NHS Hero Dinner’ initiative, ensuring those on the frontline had access to healthy, nutritious meals[vii].

The menu featured homemade soups, cottage pie and vegetable curry, cooked by an army of volunteer chefs and delivered daily with the support of just over £10,000 in donations from the public.

April saw the rise of an unlikely fundraising star, as a 99-year-old former British Army officer pledged to walk 100 laps of his garden before his 100th birthday, with the goal of raising £1,000 for the NHS. Few people could have predicted what would happen next.

Within hours of a local press release, national news channels had picked up the story and Good Morning Britain host Piers Morgan pledged £10,000 of his own money[viii].

On 16th April, Moore crossed the finish line in his garden live on BBC Breakfast, flanked by a guard of honour from the 1st Battalion of the Yorkshire Regiment and – with just over £32 million raised – cemented his place in the nation’s heart.

[i] The Guardian, ‘Goats take over empty welsh streets’, March 2020

[iii] The Guardian, ‘Clap for our Carers: the very unBritish ritual that united the nation’, May 2020

[iv] The Guardian, ‘This made me smile’: our readers’ favourite coronavirus street art, May 2020